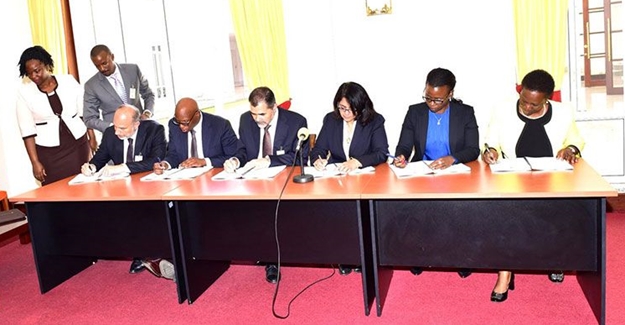 The government of Uganda has signed the contract for the construction of the $4bn oil refinery, offering further clarity on how the country’s oil resources will be exploited.

Minister of Energy and Mineral Development, Irene Muloni, signed the contract with the Albertine Graben Refinery Consortium, which is led by General Electric after more than a year of negotiations. It also ends a more-than-five-year struggle by Uganda’s government to get a company to invest in a refinery, which has a questionable return on investment.

The refinery will be built under a public-private partnership, favouring the consortium with a 60% shareholding while the government, through the national oil company, will retain the other 40%.

Uganda is expected to invite East African states to buy into its 40% stake, of which Tanzania has already committed to taking up about 7%. The consortium is made up of General Electric, Saipem from Italy, Yaatra Ventures from the United States of America and Intra-continent Asset Holdings.

The profile of the consortium looks quite weak and there are some doubts it can pull off a $4bn project. There is little independent publicly-available information about Intra-continent Asset Holdings.

Questions are bound to be asked as to how this consortium will be able to attract the capital and expertise to build the refinery. However, in October, the Albertine Graben Refinery consortium had posted a $2m commitment bond with government ahead of the signing of the project framework agreement (PFA).

Up to 70% of the financing of the refinery will be through debt with the other 30% coming in as equity from the project partners. In August, the government announced it had “agreed core project terms” for the refinery project.

After signing the PFA, the consortium would be required to finance all pre-final investment decision activities up to $100m.

The pre-FID activities, according to the terms of the arrangement, include market studies, logistics studies, technology licensing, refinery configuration studies, environmental and social impact assessment, and front end engineering design.

These activities are expected to start after the signing of the contract. The major upstream companies operating in Uganda – Total, Tullow and Cnooc – had for long preferred a crude oil export pipeline because they felt the product had a more lucrative market abroad.

Uganda’s government thought otherwise, throwing its weight behind the construction of a refinery. Government commissioned a Swiss firm, Foster Wheeler, to come up with a report that offered pointers on how an oil refinery made economic sense, especially from the perspective of creating spin-off industries such as those that make bitumen, which is crucial in the construction industry.

Compromises needed to be made. To get the three oil companies to commit investments in the country, Uganda’s government agreed to the demands of having a crude oil pipeline. However, it never dropped its ambition of building a refinery.