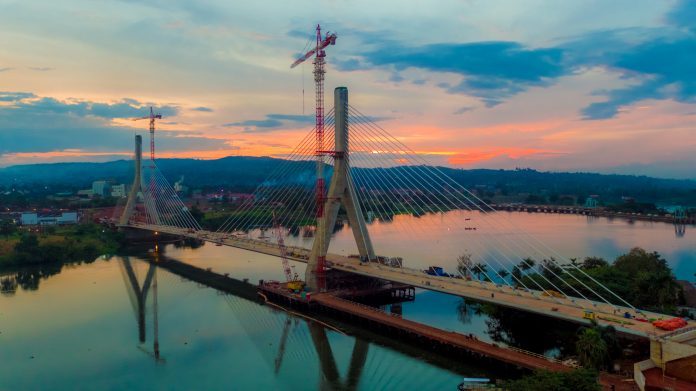 “I’m happy the work is done. We did best quality assurance and rigorous quality control and tested the construction materials with state-of-the-art equipment, both within and abroad in Singapore and Japan. The bridge is an excellent piece of engineering,” said Eng Lawrence Pario, the contractor manager responsible for overall coordination, supervision and management of the project.

The new Nile bridge which was financed by the Japanese government, is a cable stayed bridge which will align at 500 metres upstream of Nalubaale Dam with river width of 300 metres. The 525 metre-long bridge has a central span of 290 metres, end spans of 135 metres and 100 metres on the east and west banks respectively.

The Nile bridge, also is the first cable-stayed bridge in East Africa crossing the Victoria Nile, will link the Northern Corridor that connects Kenya with the Democratic Republic of Congo.

The bridge was designed with a structural life span of 120 years.The Japanese loan agreement for the Nile Bridge construction will be paid back at 0.01 % of annual interest rate within 40 years. Under the concession, Uganda was given a grace period of 10 years.

Samuel Muhoozi, the Director of Roads and Bridges at Uganda National Roads Authority (UNRA),  contends that the new bridge has the ability to become a major tourist attraction because of its  novelty.

“One of the aims of constructing this bridge was enhancing tourism with addition of this iconic signature bridge in this picturesque location,” said Samuel Muhoozi.

The name
Zenitaka Corporation and Hyundai Engineering and Construction Company from Japan and South Korea, respectively, erected the overpass formally named The Source of Nile Bridge for its proximity to the upstream point where River Nile flows out of Lake Victoria.
It is planned to be adorned with Uganda, Japan and Uganda National Roads Authority (Unra) flags to symbolize the partnership between the trio.