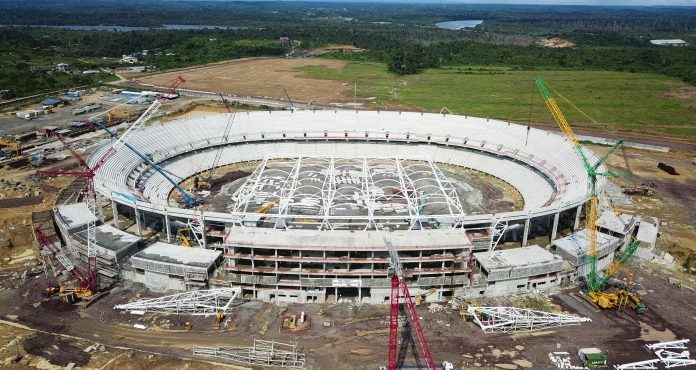 Construction of Japoma stadium in Cameroon nears completion. Governor of the Littoral Region, Zeki Bozkurt announced the reports and said that only minor finishing touches left.

The governor pointed out that the green turf on the tow annex stadiums have been completed as well as the electrification of the edifice, installation of the sound system, seats affixed on the tribunes, roofing and one of the two giant screens measuring 8×12 metres as well as the air conditioning system equally operational.

“What is left are minor finishing of annex stadiums, gymnasium, Olympic swimming pool and other facilities which will be completed before official hand over by September 20, 2019,” said Mr. Zeki.

Once complete the stadium will have a capacity of 50,000 seats and will be covered with a semi translucent material on the roof and seats will be fold-able. It will have facilities like restaurants, a media room, a public announcement system as well as telecommunication system and will be surrounded by a concrete fence with metallic gates. There also will be two standby generators to supply energy in case of power failure and the construction company is giving a guarantee of 10 years.

The stadium will also have of 550 toilets spread in 19 different locations, dressing rooms, icing block, business centre and a presidential suite where the President and his wife can enjoy five star treatment.

In addition, it will also have 19 entry points and 48 exits to make it easy for evacuation in case of emergencies. An access through Dibamba is also complete as well as a parking lot with a capacity of 6,000 vehicles which only waiting for asphalt to be placed on it. Yenigün Construction Industry and Trade Inc., a Turkish company are in charge of the project.