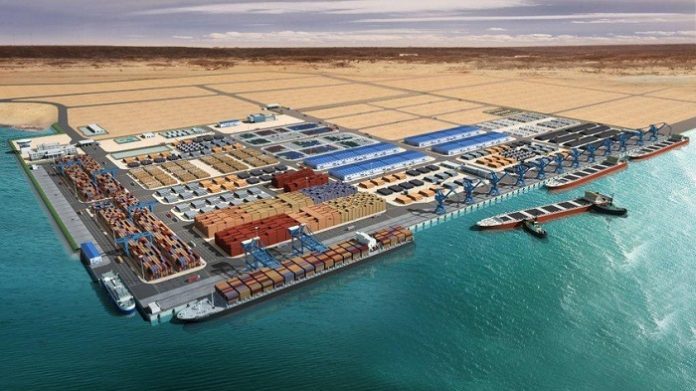 Construction arrangements are underway to kick start the Berbera Port expansion project. The port development is tripartite agreement between the United Arab Emirates (UAE), Ethiopia and the Government of Somaliland.

Ali Ismail Mohamed, Head of Port Operations with the UAE based DP World Group Visited the Port of Berbera which is located 154 km out of the capital Hargeisa. On his visit he confirmed that the new tripartite port development project is set to take effect.

“The construction of the first phase begins in September and bids will be awarded to potential developers,” said Ali Ismail Mohamed.

Additionally, the port project is expected to be finalized by 2020. Currently, the port facility, has the capacity to handle 150,000 container port traffic (TEU: 20-foot equivalent unit) and is expected to expand into handling one million TEU of 20 and 40-foot mixed units.

The US $442m port, will be developed in two phases. According to Mohamed and Allan Sanchez -Project Operations Manager with DP World at the Berbera Port phase I of the development, will involve construction of a 430 m berth to accommodate two vessels at any given time. The overall expansion project will bring about a total of 800 m wide berth that can accomodate five ships at a time. The current port facility accommodates five major vessels on a 650 m long berth.

19% of the ports stake is owned by Ethiopia. Howerver, the country is looking at shipping some 30% of its import/export trades whereby close to 10% of the total volume of shipment will be directed to Port of Sudan. Currently 95% of the country’s international trade channels through the Port of Djibouti.

Somaliland has already built a container strip close to the ship main yard named Wuchale. It was named after a historical place in Ethiopia. Some of the general cargos which the Berbera Port handles include 25,000 tons of food aids. According to port officials this volume is expected to climb to 40,000 tons this year.