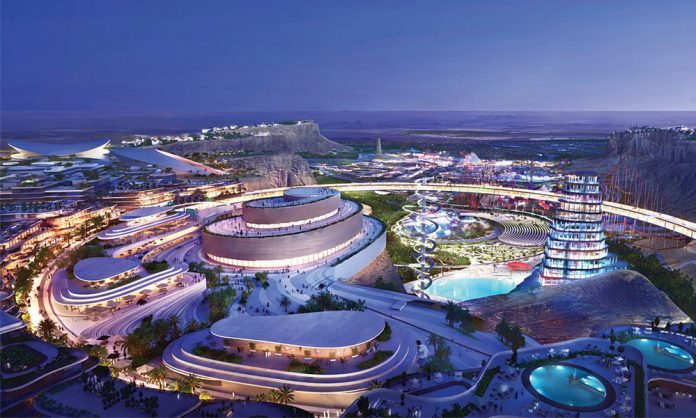 The world’s largest entertainment city which is currently under construction in Al Qidiya, 45 km southwest of Riyadh in Saudi Arabia is set to open to the public in the next 3years.

Construction works on this one of a kind structure featuring sports, cultural and recreational facilities begun in April 2018. The project has been divided into five development nodes; a Resort Core, a City Centre, an Eco Core, a Motion Core, and a Golf and Residential Neighborhood.

The entertainment city’s design, was made by a consortium that includes Bjarke Ingles Group (BIG), a Denmark-based company after extensive consideration of the natural patterns of site.

The designers agreed that construction shall only cover 30% of the entire land set aside for the project, which is 334 sq. km, leaving the rest of the land for natural conservation. The project is being developed by the Qiddiya Investment Company (QIC) which is fully owned by the Public Investment Fund (PIF) of Saudi Arabia

Phase one of the project which is expected to be complete by 2022, will have six Flags Qiddiya, a family-oriented park filled with rides and attractions distributed throughout six themed lands.

Neighboring this pedestrian-oriented district shall be a major outdoor entertainment venue, capable of accommodating events that can host 5,000 to 40,000 heads in a park-like setting, punctuated with active skating and skiing facilities.

The entertainment city is expected to make a qualitative leap in the Kingdom and support the country’s vision to achieve more prosperity, progress for society and raising the status of the capital Riyadh to the best top 100 cities for living in the world.

It is also expected to contribute into the diversification of the kingdom’s economy away from oil-based sources of revenue while creating job opportunities for Saudi’s young population.