Home News Companies & Markets Vunani sowing for the next harvest

The company has cleaned up its legacy investments and now targets a further R4bn asset growth.

Vunani might have hit the headlines because of some of its controversial corporate advisory clients. But the future of the financial services group lies with its more stable fund management and benefit services businesses.

The failure of the Sagarmatha listing this month has hit some of its advisers hard. Vunani Securities, according to Sagarmatha’s prelisting statement, was in line to earn R29m if the initial public offering had been a success. As its revenue was R69m for the whole of the year to February 2018, this would have accounted for almost six months of Vunani Securities’ revenue in one go. We won’t know the effect of the botched listing until the next results, for the six months to August.

Vunani CEO Ethan Dube says it still expects to be paid for the work it did. “We were there to advise and it was up to the board and shareholders to raise the pertinent issues.”

Vunani, which means “let’s harvest,” has its roots in corporate finance and institutional stockbroking. It is the home of SA’s leading small-caps analyst, Anthony Clark, and it enjoys an allocation of trading income from many institutions which allocate to black stockbrokers as part of their black economic empowerment programmes.

This should be growing: for example, the Eskom Pension & Provident Fund is increasing its allocation to black stockbrokers from 20% to 40%. Yet Vunani’s stockbroking revenue fell 6% to R63.7m and profit halved to R1.4m. Advisory services, with no unicorns to hunt yet, had a worse year, with losses trebling to R1.5m.

Dube says these earnings are likely to remain volatile, but Vunani will rely increasingly on the annuity income from Vunani Fund Managers (VFM) and Fairheads Benefit Services. VFM has changed from a purely quantitative asset manager to a more fundamental stockpicker and asset allocator.

Dube says assets under management increased by R5bn to R20.9bn in the year, and a further R4bn will be added by the beginning of May. He says VFM and Fairheads have a similar potential client base, with VFM offering investment management and Fairheads the management of beneficiary accounts (for orphans) to the same pension funds. 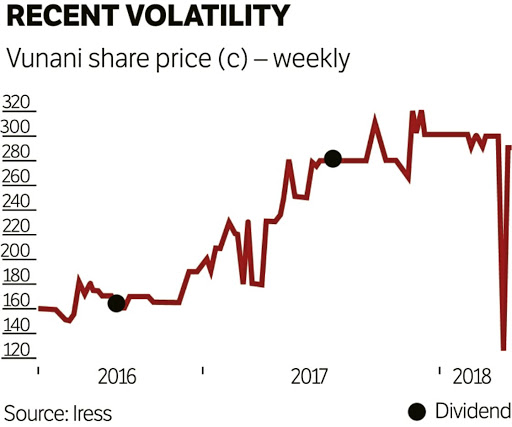 Vunani also has a presence in less competitive investment markets in Southern Africa, through investments in Purpose Vunani in Zimbabwe and Alliance Capital in Malawi, both of which are profitable, though marginal to the group for now.

Vunani hopes to partner with similar boutiques in Botswana and Namibia.

Vunani’s profit for the year of R45.6m grew a respectable 14%, but 90% of its earnings were generated by the mining activities, principally in coal processing for groups such as Anglo American and South32. Much of this “profit” was in fair-value adjustments rather than in hard cash.

Vunani is experienced in private equity investments, though its nonmining investments have struggled with a R5.3m loss.

As for its listed investments Dube has cleaned up Vunani, which at one stage had such a long tail of listed small-cap investments it could have been mistaken for an AltX exchange traded fund. Last year it almost completed the car wash by disposing of its shares in BSI Steel, which leaves Workforce Holdings as its last legacy investment.

For now, Vunani has exited the private wealth management area. Dube says there were differences with partners Peter Warren and Mark Whitman, who did not want to build a large business. But Vunani will re-enter the market with the right partners.

Vunani might well court as much controversy as Sagarmatha through its proposed huge mixed-use property development midway between Clifton and Camps Bay in Cape Town. It is already meeting stiff opposition from local residents.

“We understand that the local government has to go through the appropriate procedures,” says Dube, “but we are confident that the project will go through.”