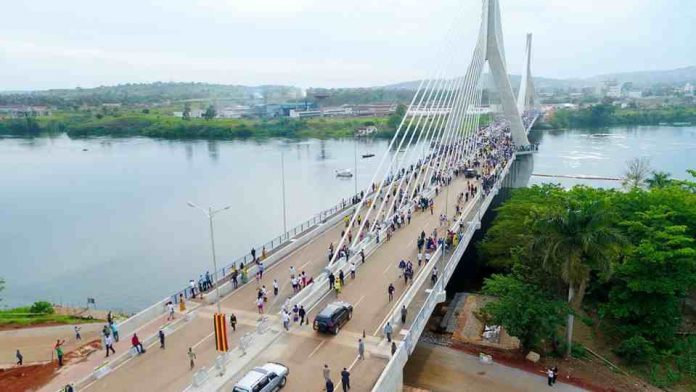 The Uganda National Roads Authority (Unra) has announced that the new Nile Bridge is undergoing fresh repairs in respect to replacing the old temporary layer with a permanent one.

Unra Public Relations officer, Mr Mark Ssali who announced the reports said that engineers are removing the old asphalt material which failed to be compatible with water proof materials.

This has prompted the authorities to divert Jinja-bound traffic to the old Nalubaale Bridge to allow maintenance works. Ssali noted that engineers  working on the repairs have promised to finish the work in about two months and the bridge will be ready for use by July.

Mr. Ssali also affirmed that that the bridge has no structural problems and that they were simply replacing the entire road surface whose asphalt was rotting. According to contractors, they are replacing AC14 asphalt – which was not bonding well with water proofing material – with modified polymer asphalt.

The US $129m new Nile Bridge was commissioned last year by President, Yoweri Kaguta Museveni. It is a cable stayed bridge which will align at 500 metres upstream of Nalubaale Dam with river width of 300 metres. The 525 metre-long bridge has a central span of 290 metres, end spans of 135 metres and 100 metres on the east and west banks respectively.

The bridge which was financed by the Japanese government, also is the first cable-stayed bridge in East Africa crossing the Victoria Nile, linking the Northenr Corridor that connects Kenya with the Democratic Republic of Congo

The bridge was designed with a structural life span of 120 years.The Japanese loan agreement for the Nile Bridge construction will be paid back at 0.01 % of annual interest rate within 40 years. Under the concession, Uganda was given a grace period of 10 years.