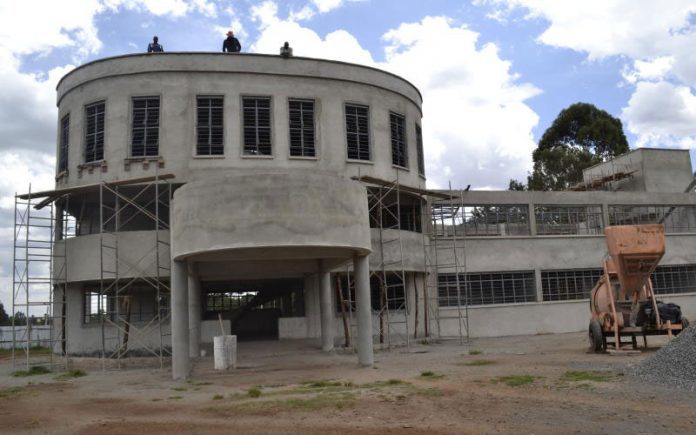 Phase one of the Eliud Kipchoge Sports Complex which is under construction at Kabsabet Showground in Kenya nears completion. Elly Kurgat, a Sports Executive confirmed the reports and said that the phase two is set to commence soon as bids are currently under evaluation.

The Eliud Kipchoge Sports Complex is being build in honor of the 2018 BMW Berlin Marathon Record Holder Eliud Kipchoge. Construction works on phase one consists of a state of the art gym facility, a conference hall, the complex’s main offices, training track, and an athletes’ lounge. It has so far cost the Nandi County government US $300, 000 solely.

Phase two which is estimated to cost US $700,000 will feature a physiotherapy room, 100-bed capacity hostel facility, a second conference hall, and a restaurant among other facilities.

Governor Stephen Sang’s administration took over the construction of the Sports Complex in September last year. The structure would be initially named Kipchoge Keino Stadium but the governor upon the takeover announced that the facility would be renamed to commemorate the newly renowned athlete.

The entire sports complex, upon completion in October this year shall boast a 200 bed capacity for boarding athletes, swimming pool, an art studio, and gallery that will be named after prominent heroes and heroines in the sports sector.

Last year Governor Sang noted that his government will work with schools to nurture talents and use the new sport complex grounds for trials for the next world championship as well as the summer Olympics.

Mr. Sang lately has also revealed a grand plan to give the county’s sports sector a new face by constructing new world-class training grounds and revamping the existing grounds. He also revealed plans to sell the county to international sports brands with help from renowned athletic champions like Eliud Kipchoge, Amos Kipruto among other athletes from the county.