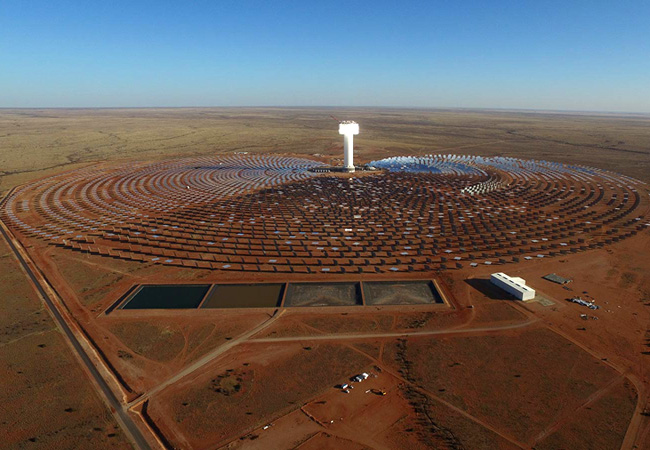 The Karoshoek Solar project is one of many successful Government Renewable Energy Independent Power Producer Procurement Programme (REIPPPP) that have mobilised private capital to provide the country with renewable energy.

The Karoshoek solar project utilizes the relatively new concentrated solar power technology (CSP) which has the unique advantage of being able to supply power around the clock,

CSP technology works by concentrating the sun’s rays at one point that heats water turning it to steam to run a turbine and generate electricity as opposed to the more conventional PV solar panels that convert the solar energy directly into electricity.

The heat from sun in the liquid can be stored in the CSP method by storing the heat as molten salts that can be used to transfer the heat back to water and then steam and so continue generating steam during the night.

CSP is still gaining ground but with only about 5GW of installed capacity globally it still trails solar PV which has over 250GW and wind that boasts 500GW installed. AS costs of construction continue to drop, this technology is gaining in popularity in comparison to other base-load methods such as fossil fuels and hydro. The largest CSP solar plant in the world is located in Morocco.

The Karoshoek solar project has 360,000 curved mirrors over a 400ha area. The mirrors are aligned with precision using GPS that adjusts them in the course of the day to optimally harness the sun