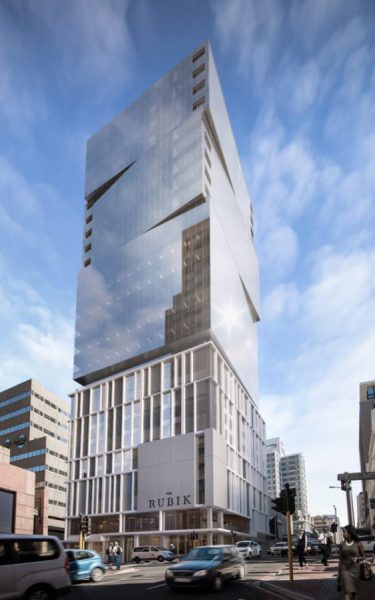 South Africa is set to construct a skyscraper in Cape Town’s CBD which resembles a Rubik’s cube with a new edition of modern architectural design.

Construction of the luxurious mixed use skyscraper dubbed ‘The Rubik’ will be developed by Abland – one of South Africa’s leading property developers – in partnership with Nedbank and Giflo. Its design is a brainchild of DHK Architects and it is marketed by Dogon Group Properties.

The RubiK skyscraper will be situated at the junction of Loop and Riebeek Street. It will be made up of premium residential apartments above luxury offices and high-end retail space, housed within a distinctive modern glass-clad “tiered” building that is comparable with a Rubik’s Cube in the middle of its faces being rotated.

More over, the prime location of the structure will also offer spectacular views over Table Mountain, Lion’s Head and the ocean. This will be a highly desirable inner-city lifestyle. The project is planned to commence in June this year and to be complete by the year 2021.

Jurgens Prinsloo, Abland’s Regional Manager noted that the building will offer doubled-glazed office windows as it will have a modern glass facade, an air-conditioning system that doesn’t use water evaporation for cooling, energy-efficient lighting, and water heating systems which are aligned with green-star initiatives.

“The beautiful and modern Rubik has a distinctly international feel that conforms to global trends and influences.This exciting building, which will stand as a design beacon in Cape Town’s CBD, will allow occupants to live and work in a distinctive space within the bustling center of one of the world’s most beautiful cities. Loop Street is vibrant and cosmopolitan, known for its night life, historic buildings, art galleries, antique shops, restaurants, bars and cafés,” said Rob Stefanutto, Managing Director of Dogon Group properties.