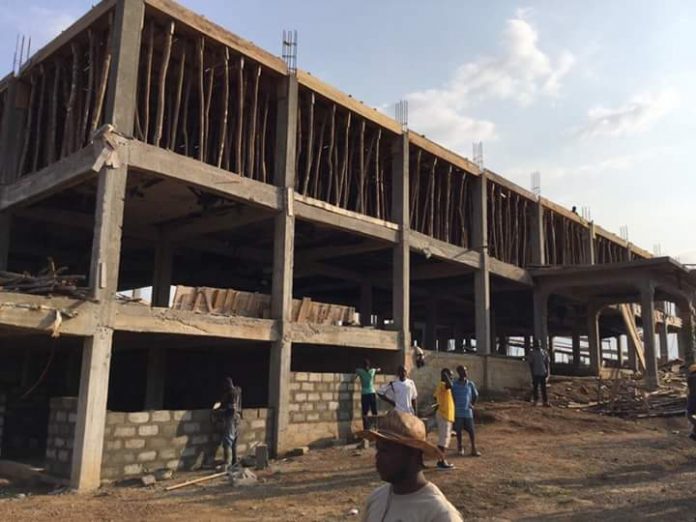 The government of Liberia has broken grounds for the construction of US $500,000 multi-purpose city hall at Nimba County in Ganta City. Speaking during the ceremony, Ganta City Mayor Amos N. Suah said construction works has officially commenced with pillars already mounted, to be followed by first floor casting.

The multi purpose hall will contain offices, conference halls, guest rooms and other modern facilities. This will allow residents to have a place to celebrate any big event including Christmas.

Construction is projected to take one year. City authorities are sourcing funds from the local residents and at the same time appealing to the government for support to meet up with the one year deadline of completion.

The groundbreaking ceremony was graced by high profile individuals headed by Internal Affairs Minister Varney Sirleaf and former Nimba Senator Hilary Gbomblee. The Minister gave US $10,000 as President George Weah’s initial contribution to the construction and assured government’s support to complete the project on the set deadline.

“We are pleased to be engaged with this project because most of our workshops are done on private rented space which is quite costly therefore this development would not have come at a better time,” said the Minister.

Mayor Suah also promised transparency and accountability while undertaking the project and further promised to form a committee that will manage every cent collected and give an account to the public regarding the expenditures.

“We urge all residents, especially those in Ganta to make meaning contributions towards this goal,” the Mayor said.

Ganta is one of the growing cities in Liberia. Yet the lack of city hall, pipe-borne water and access to the existing streets remain obstacles to the speedy development of the city.