Home News Global Business Forum on Africa 2017 calls for an investment boost in... 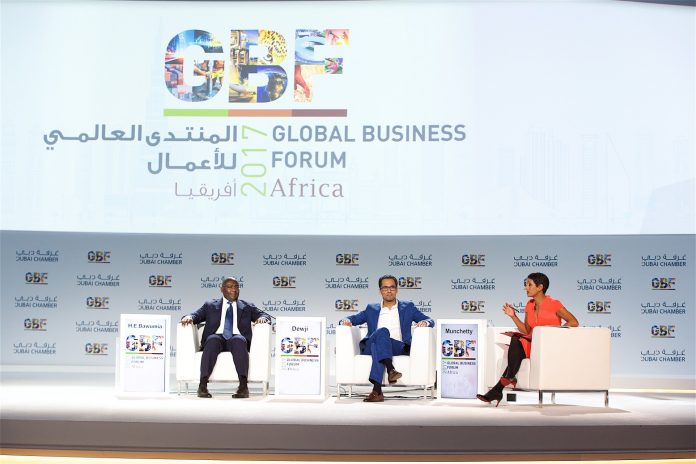 The 4th Global Business Forum on Africa, organised by the Dubai Chamber of Commerce and Industry, has called for increase in investment flows between the UAE and Africa in several key sectors, including trade, financial services, logistics, and tourism.

A poll conducted during the two-day forum revealed that 48% of delegates considered trade to be the most promising sector for investment, followed by financial services (24%), and 14% for both logistics and tourism sectors.
Participants labeled the above sectors as key areas where Dubai can offer its expertise and investment to boost African economies.

Over the last five years, Dubai Chamber of Commerce and Industry has stepped up its efforts aimed at strengthening economic ties between Dubai and Africa by opening four representative offices on the continent and organising the Global Business Forum on Africa in Dubai.

There are different sectors that investor from different part of the world look at in Africa and infrastructure is one of the very important sector.

The Chamber recently announced that it has invested about $27.7 million to raise awareness of trade and investment opportunities in Africa, and promote Dubai as an attractive business hub for companies on the continent.

Other activities carried out by the Chamber in recent years include organising frequent trade missions to African countries, conducting specialised research and studies, and developing the Africa Gateway app to expand is members’ access to opportunities opening up in the fast-growing market.

President and CEO of Dubai Chamber, Hamad Buamim explained that these efforts have given a major boost to UAE-Africa trade ties by facilitating cooperation between businesses and investors on both sides.

He noted that the Global Business Forum on Africa was launched in 2013 with the intention of establishing an ideal platform to explore business potential in Africa, adding that participation in the forum has increased significantly in recent years.

He revealed that Dubai’s non-oil trade with Africa has grown to exceed AED 700 billion in the last five years, while 10,000 African companies have joined Dubai Chamber over the same period, bring the total number of African businesses registered with the Chamber to over 17,000 today.

According to a number of Africa-based entrepreneurs, African countries have come a long way in terms of connectivity, by expanding digital infrastructure and opening up their economies to new growth opportunities.

Emirate the world’s fourth largest airline and the largest in the Gulf with a 6 percent passenger growth in Africa in 2017 recently announced an increase of more destinations in Africa as a means of improving business integration with the continent.

The Senior Vice president, commercial operations for Africa, Emirates, Orhan Abbas said they have a hub in Dubai that caters to all the connectivities in each point in Africa”

“As you know the African continent is large and huge from the north to the south, many hours of flying and off course any flight you take on Emirate stop at the hub in Dubai. We operate in 22 countries in Africa, if a passenger is coming out from Morocco, and stop over at Dubai, they have a choice of four flights a day from Johannesburg or three flights a day to Cape Town or Durban,” he added.

The Chief executive officer, Dubia Corporation for Tourism, Issam Kazim noted that they are leveraging on the social media and the digital spaces as well to hit the mass audience within Africa.

“I think for us, it was important, we had a very good experience working with one of the movie stars in Nigeria and Africa as well, which is the wedding party. We participated in the award ceremony, and we had an amazing reaction from the market, so that gave us the incentive to actually work with the same producers to shoot their sequence in Dubai. It encourages people to really get an experience of these celebrities that they are familiar with what they are doing in Dubai and how they experience Dubai as well,” Kazim said.

The Global Business Forum on Africa, organised by Dubai Chamber, is the largest event of its kind that is hosted outside of the continent, while it remains one of the most high-profile international forums dedicated to exploring investment opportunities in fast-growing African markets.

This year’s forum, held under the theme “Next Generation Africa”, examined the role of young African entrepreneurs who are stimulating economic growth, and building relationships and partnerships with companies around the world. In addition, sessions focused on how technology and digitalisation are reshaping African economies and meeting the demand of a growing middle class.