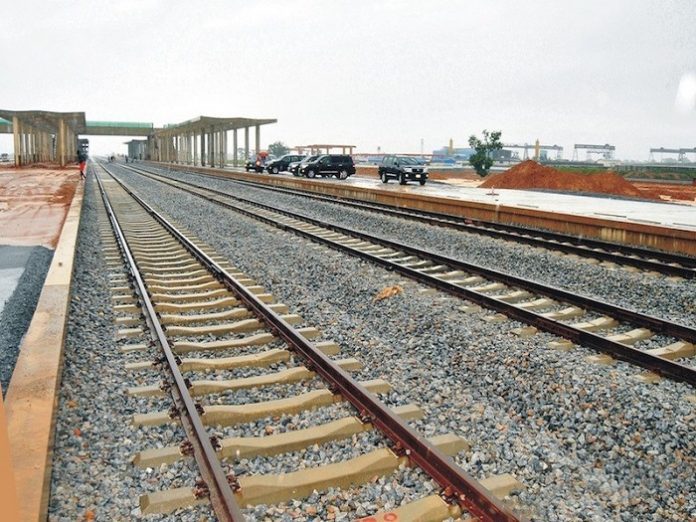 The Federal Government of Nigeria has assured that work on the Apapa corridor of the Lagos-Ibadan Rail project will commence this August.

Lagos State Governor Akinwunmi Ambode confirmed the statement and commended the Government’s action expressing optimism that the development would go a long way to enhance movement of cargos from Lagos to other parts of the country.

The Government also approved US $203.6m for the reconstruction of the road from Apapa to the Toll Gate on Lagos-Ibadan Expressway.

Governor,Chibuike Rotimi Amaechi also affirmed that contractors would move to site to continue the Lagos-Ibadan Rail Project from Apapa as part of efforts to solve solution to the perennial traffic gridlock in the axis.

“You would recall that the Federal Government had commenced construction of the Lagos-Ibadan railway and the focus was more on the Ibadan and Abeokuta axis because we had challenges in Lagos which included utilities and not much with the communities. I think I have to commend the communities that allowed us to use their land, though, we would pay compensation but not much. So, we are grateful to all the communities from Lagos to Ibadan,” said Amaechi.

“However, we have utility challenges with both gas pipes and water and beyond the gas pipes; we also have challenges with bridges to either build or demolish.I remember when we said we wanted to demolish the Costain Bridge, everybody screamed and we had to invite the Lagos Governor to assist us; he took us there and promised that he would pay the compensation,” He noted.

“I like the fact that the Lagos State Government is also contributing to these efforts. So, what we have come here to do is to ensure that there is a win-win situation and the Lagos Governor has been very cooperative. He cooperated all the way from the beginning till now and what we have decided is that the CCECC should move back to Lagos commence construction because we are insisting that by December, we should complete the Lagos-Ibadan Railway.” Ameachi added.

The Federal Government has also awarded the contract to deal with the road between Apapa and Tin Can to enable us to evacuate cargos freely which is an addition to the rail. In his remarks, Governor Ambode commended the Federal Government for approving the reconstruction of the Apapa-Oshodi Expressway as part of efforts to finding a lasting solution to the perennial traffic gridlock around the axis.

“We want to use this platform to thank the President and the Federal Executive Council for approving the reconstruction of the Tin Can-Apapa-Oshodi Expressway up to the Toll Gate which was done on Wednesday. This is in continuation of our efforts at finding a permanent solution to gridlock in the Apapa axis. We just want to reiterate our commitment to collaborate with the Federal Government to ensure that we reduce the sufferings of Lagosians,” said Governor Ambode.

“I am happy that we have emerged from this meeting, with the Federal Ministry of Transport, to ensure that this rail project is delivered within the next six to 12 months,” he added.