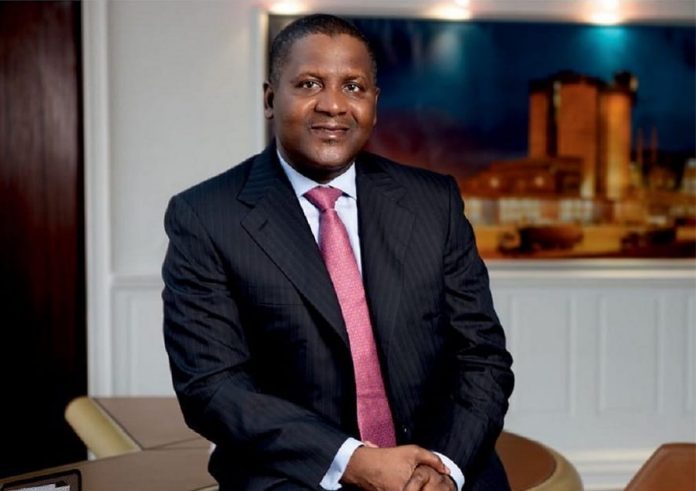 According to The Herald, Nigerian billionaire Aliko Dangote has renewed his interest in pursuing his USD 1.5bn investment in Zimbabwe and on the 9 April, dispatched an advance team comprising geologists. The team will be in Zimbabwe for 10 days.

The delegation is expected to meet President Mnangagwa and Mines and Mining Development Minister Winston Chitando. Mr Dangote visited the country in 2015 and expressed interest in power generation, coal mining and cement production.

He was then frustrated by the previous administration of Mr Robert Mugabe. In an interview at the Robert Gabriel Mugabe International Airport, Dangote Industries’ senior geologist Dr Norash Kumar said they were interested in mining coal. “It depends on the mineral potential that we are looking for,” he said.

Dangote Industries local representative Josie Mahachi said they were hopeful things would work this time around. “The technical group is back in the country,” she said. “With the new dispensation, things are going to move on smoothly”, she added. This is the team that the president of Dangote Holdings, Dangote, has sent to Zimbabwe to do the groundwork before his major visit in the few weeks to come. “They are here in the country for 10 days and looking for an investment of USD 1.5bn.”

Buy Zimbabwe chairperson Dr Anxious Masuka said the visit by the Dangote team presented an opportunity for the country to create market linkages for the creation of wealth and jobs. “This investment fits into our narrative – the use of local resources to ensure that there are jobs,” he said. “The investment by this group will surely ensure that jobs are created”. He also added: “We are also looking into export opportunities out of those investments. I urge Zimbabweans to embrace this and (reduce) the bureaucracy to quicken the pace so that we can realise this investment sooner than later.”

Dangote Industries recently invested UDS 400m in a cement manufacturing plant in Zambia. The firm is importing coal from Zimbabwe. According to the Zimbabwe Investment Authority, a total of 162 investment projects valued at USD 1.52bn were approved in 2017 compared to 164 projects valued at USD 2.3bn in 2016. Zimbabwe expects approved investment proposals to reach a record USD 2.5bn in 2018, on the back of growing positive investor sentiment and interest following political changes that took place in November 2017. Zimbabwe expects to grow its foreign direct investment portfolio to generate more jobs, create wealth and contribute significantly to its GDP as part of efforts to revive the economy. Of course much of this will depend on the assessment of the presidential election due mid-2018, with many using this as a benchmark for whether or not the country has indeed moved into a more democratic and investor friendly phase.