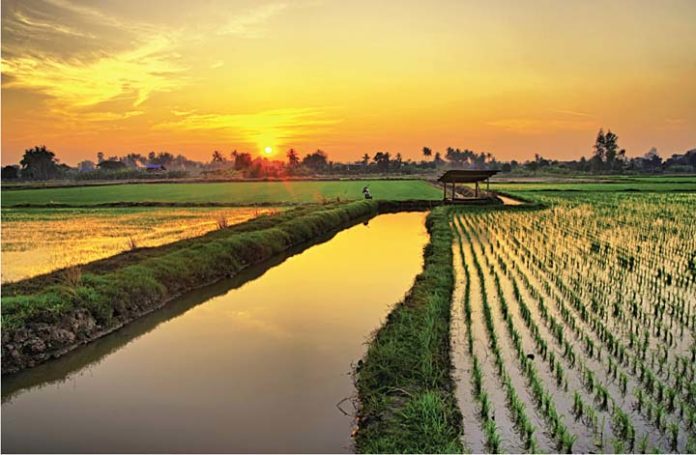 Filipino farmers need not fear a total loss of their resources after every calamity once the proposal of Rep. Arthur C. Yap of the Third District of Bohol  becomes a law.

House Bill (HB) 6923, which calls for an overhaul of the crop-insurance system of the Philippines by allowing it to provide index-based direct insurance and reinsurance policies, has been approved on third and final reading by the House of Representatives.

Yap noted that the Philippines needs a law strengthening the Philippine Crop Insurance Corp. (PCIC), because the country’s farm sector is constantly under threat of climate change.

The PCIC’s coverage, he said, should be expanded to allow it to engage in index-based insurance and reinsurance.

“There’s a lot of effort on infrastructure spending, on technology, on farm-to-market roads, but without agricultural financing, it would be very difficult to sustain the growth of Philippine agriculture,” Yap stressed.

Index-based insurance is an innovative and technically sound approach to manage risks, especially for poor and highly vulnerable farmers in the Philippine rural countryside, Yap said.

“Unlike traditional crop insurance, in which indemnity payments are linked to individual farmer yields and losses, index insurance links payments to independently established data, such as local rainfall, wind speed, temperature, typhoons, cyclones and historical yield data as trigger events to release payments and compensation to affected farmers and fisherfolk.”

But while the bill has hurdled the House, it has no counterpart measure yet in the Senate.

According to Yap, HB 6923 will set up weather index-based parameters on winds, water and sunlight.

“The ability to pay out cash early, at different stages of an unfolding calamity, without having to wait for a wipeout, is what will give our farmers and our vulnerable poor the chance to save what they can and prevent more losses and damages,” Yap said, adding, “millions of farmers are just exposed to the ravages of climate change.”

“With no real and expansive agricultural, property or life-insurance protection, farmers just watch helplessly, as the weather comes to take away the sweat and tears of investments that farmers have planted,” he added.

The lawmaker said many global companies “want to do this in the Philippines. In fact, in Africa, in Mexico, in India and in Vietnam—they are implementing it.”

Yap explained that the measure is aimed at mandating the PCIC and encouraging private insurance companies to offer index-based insurance as one of their products.

He cited the practice in Africa, where “payouts are what prevents farmers from selling their livestock and moving to cities.”

“By purchasing risk-insurance, nations can now shift disaster risk and associated economic, social and medical costs away from LGUs [local government units] and governments to the global capital market. In a case like this, the government can instead focus on disaster preparedness and a system for saving lives and distributing aid and payouts in times of calamities and disasters,” Yap noted.

The former secretary of the Department of Agriculture also said the move is a clear signal to the private sector and capital markets that the Philippines is serious in helping Filipino farmers, as well as secure food production in the country.

“This move will clearly signal to the private sector and capital markets that the Philippines is serious about this program to help our farmers, and secure food production in our country. We must also do a good job to promote a buy-in into this project with the government, primarily the DA, the DAR [Department of Agrarian Reform], DENR [Department of Environment and Natural Resources] and DOST-Pagasa [Department of Science and Technology-Philippine Atmospheric, Geophysical and Astronomical Services Administration], legislators, LGU heads, farm stakeholders, cooperatives and mainstream finance entities,” he said.

Yap added that in India, millions of farmers are insured, not only for crop wipeouts, but also for crop damages throughout the planting season.

“This happens when changes in the weather and water tables are beached. It triggers payments to farmers so they have enough time to act right away to save their farm investments,” he said.

He added that farmers need not wait for the wipeout of their crops to get paid.

In Mexico LGUs are taking out index-based insurance for their constituents. In Africa the African Risk Capacity, which has for its members African countries, is using sovereign funds to insure 160 million African farmers against weather-borne and related diseases, as well as damage due to drought, flooding and cyclones, Yap added.

“Last March 2017 the African Risk Capacity and the African Development Bank partnered exactly for this purpose: To help strengthen African countries in planning and implementing timely and targeted responses to natural disasters, thereby reducing the risk of loss and damage caused by extreme weather disturbances. What was once a program for just five countries will now be ramped up to include the whole of Africa. This is indeed stunning and a welcome news,” Yap said.

The bill also seeks to expand the types of agricultural crops that can be insured by the PCIC, and to include life and accident insurance to farmers and fishermen and their dependents.

It also aims to strengthen the financial and organizational capacity of the PCIC, while encouraging private insurance companies to offer crop insurance.

The measure said the type of crops that can be insured aside from rice include corn, high-value commercial crops, livestock, aquaculture and fishery, agro forestry and forest plantations.

It also requires farmers obtaining production loans for rice and other crops essential to food security to insure their crops with the PCIC.

The bill also authorizes the PCIC to extend life and accident insurance coverage for farmers and fishermen.

Under the bill, the PCIC shall offer weather index-based insurance, specifically for excessive or insufficient rainfall.

It also increases the penalties against persons who institute spurious crop-insurance claims or allow others to do so.

Yap said for the few farmers who actually understand and take out insurance coverage for their crops, the mode and indemnity-based system of agricultural crop insurance is dismally outdated.

He added the indemnity-based insurance system that may work for other accidents is woefully wanting when applied to the agricultural setting, and that the amount of payouts, which is less than 15 percent of total damages in the sector, speaks volumes of the inadequacy of agri-based insurance system in the Philippines today.

In 2000 Yap said the Philippines signed its commitment to join the United Nations efforts at achieving the UN Millennium Development Goals.

Among its 17 avowed Sustainable Development Goals (SDGs) is to meet head-on and reduce significantly hunger and poverty, and ensure healthy lives and promote the well-being of its citizens, he said.

“In a sector gravely reeling from the impact of underinvestment in rural infrastructure, it is heartening to note that the government is set on spending significantly more on domestic infrastructure in the urban and rural settings,” Yap said.