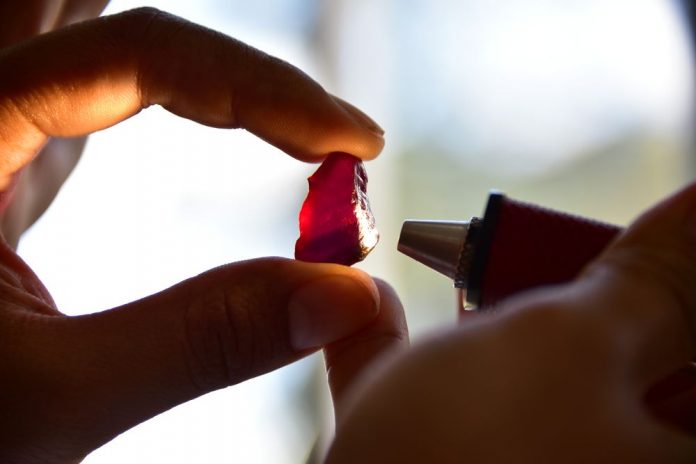 Sebastiao Pedro struck it lucky in 2014 when, as a 21-year-old small-scale miner, he found a large red ruby in northern Mozambique. He sold it to a buyer from Vietnam for $43,000, returned to his family 900 miles away and built a house with the proceeds.

Then the money ran out.

This year he went back to Montepuez, home to the world’s biggest known ruby deposit, hoping to find another small fortune. He was disappointed. A crackdown by the authorities has seen thousands of local diggers and traders arrested. Hundreds of others from as far away as Thailand have been deported.

“The situation is difficult because the police have been sending people away and the concession areas are full of company security and we can no longer work,” Pedro said as he and five fellow diggers in dust-stained clothes scratched around in the gravel beside a small dam.

A few hundred yards away is Gemfields Group Ltd.’s ruby operation. After a woodcutter discovered a shiny red stone there in 2009, as many as 10,000 people from all over the world descended on the dense woodland, digging and trading rubies, or offering goods and services to those doing the mining.

“It looked like a gold rush in the Wild West,” said Gemfields Chief Executive Officer Sean Gilbertson, son of Brian, the one-time CEO of the world biggest miner BHP Billiton Plc. “There was a lot of violence, a lot of criminality.”

Four years ago, Pedro would sneak into mining concessions and dig up gravel containing the precious stones. Now it’s too dangerous, so he and his colleagues wait for other informal miners who are able to get into the mining areas to bring back sacks of dirt — waste that’s already been scoured it for the gems.

Though it’s difficult to know the value of the global rough-ruby trade because it’s so fragmented, the New York-based Natural Resource Governance Institute estimates the ruby, emerald and sapphire business is worth as much as $2.5 billion annually.

From nothing 10 years ago, Mozambique now accounts for as much as 80 percent of global ruby output, according to Richard Hughes, an expert on the stones at Lotus Gemology Co. Ltd. in Bangkok. Many of Montepuez’s rubies are the colors consumers covet — “like a red traffic light,” he said.

The promise of riches is perhaps best illustrated by the $72 million that Gemfields, which controls the only major mine in the area, raised at a June auction in Singapore. While the quality of stones differs at each sale, making comparisons difficult, prices doubled from a year earlier to $122 per carat.

Growing demand and rising prices, thanks mainly to Asian buying, have spurred plans by Gemfields to increase production at the site over the next two years, build a new processing plant and a sort-house for grading the stones. They’ve also attracted more robust competition.

Fura Gems Inc., a Toronto-based miner, last month announced two deals to buy ruby concessions that will be the largest in the country. That’s a sizable land package: Gemfields itself has an area almost half the size of New York City.

The startup is run by Dev Shetty, ex-chief operating officer at Gemfields, and he’s rapidly put together a team, many of whom he poached from his former employer.

Shetty shares Gilbertson’s counter-intuitive reasoning that demand will follow production increases. As companies like Fura and Gemfields provide a more consistent supply of quality stones, buyers will have confidence to purchase more.

Small producers make up 90 percent of the colored gemstone industry, said Shetty, who helped to build Gemfields’ Montepuez operation. Fura plans to account for 10 percent of the trade in five years, and 15 percent in a decade.

“We need more organized players in this sector,” Shetty said. “There is no doubt in my mind that prices will continue to increase.”

Mozambique’s shift to a more organized trade has caused strife. Because the deposits are shallow — starting at 2 meters (7 feet) below the surface in places — access is easy. That makes it attractive to informal miners, or “garimpeiros,” as they’re known locally.

In one of Gemfields’ pits, thousands of pinkish red stones glisten on the floor, and can easily be plucked — were it not for the tight security. (Workers and visitors are patted down and made to remove their boots even when moving from section to section of the operation.)

Researchers have said an insurgency in Cabo Delgado might be getting funding from the illicit ruby trade, but Gilbertson says this is unlikely as Montepuez is more than 120 miles away from from where most of the attacks have taken place.

Gemfields, owner of luxury jeweler Faberge, said it takes the allegations seriously and denounced any form of violence or abuse. Many of the acts in the claim involved the Mozambican police, and Leigh Day wants to hold the company responsible, according to Gemfields, adding that it will defend itself vigorously.

Fabiao Namiva, an official in the Montepuez local government, said that while there have been some problems — the authorities want Gemfields to move more quickly in resettling a village away from its mining concession — rubies have benefited the country.

“The exploitation of rubies is contributing greatly to the revenue of the state. We are satisfied with that,” he said by phone. “There are problems managing people’s expectations.”

Gemfields has built three schools and provides mobile clinics in the area. It has also created 1,000 jobs, according to Gilbertson.

But for people like Visado Mariano, who a year ago arrived from neighboring Nampula province to hunt for the gems, opportunities are few. He toils on the banks of the small dam across the road from the mine, hoping to turn up something shiny and red.

“We know how to search for rubies. If the company got us to work with them in the mines, it would be better,” he said. “I live badly and sometimes spend days without eating, but I will continue here. Even if I go home I have no job. It’s the same thing.”