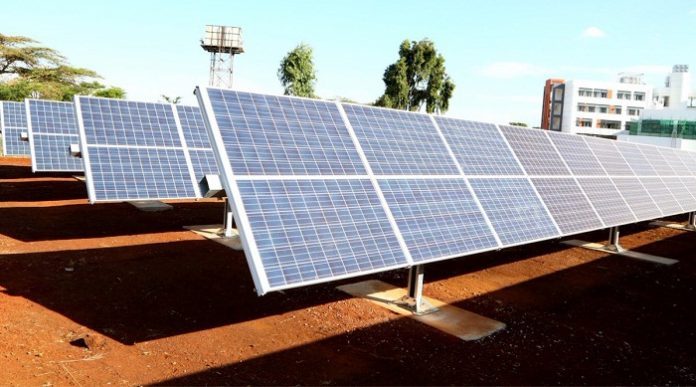 Kenyatta University (KU) in Kenya has switched on the first phase of a US $17m 100KW solar plant that will see the institution generate its own electricity and later offload excess power onto the national grid once the second phase is complete.

Development of Phase one of the plant was by France-based solar panels manufacturer Urbasolar through funding from the French government. It occupies about three acres.
KU did not, however, provide figures on the amount the university expects to save from generating its own electricity.

Energy and Petroleum secretary Charles Keter said the country has received substantial funding from the French government that is meant to go towards achieving universal electrification by 2020.

The total commitments amount to US $500m for financing the last mile connectivity project. An additional US $15m is in commitment for electrifying off-grid areas. “With support of development partners, we will achieve our objective of universal electrification by 2020,” added Mr Keter.

Kenyans are also expected to get the necessary training on operation of new solar models energy in the country. “Considering the huge investments in the solar industry, we will require trained human resource to operate and maintain these systems, as well as innovate on delivery of better models,” said Mr Keter.

French Minister for Ecological and Inclusive Transition, Nicholas Hulot, said his government would continuously support efforts aimed at promoting renewable energy generation, which is the core of the Paris agreement on climate change.

According to Mr Hulot, the French government will support these ambitious choices. French companies also have the expertise to bring innovative solutions to meet these needs.

Urbarsolar president Arnaud Mine further noted that the pilot plant is capable of tracking the direction of the sun; therefore it will absorb maximum energy during the day.

Additionaly, technology used to make the plant allows for installation of a software that enables easy tracking of its contribution to the national grid.