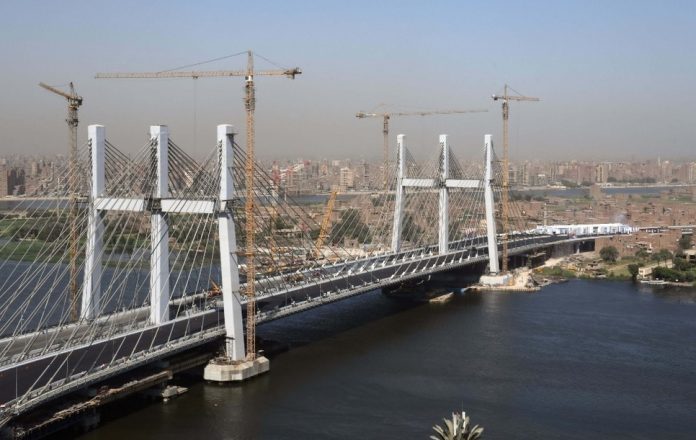 Implemented by the Armed Forces Engineering Authority in cooperation with a number of national companies, the 16.7 kilometers Rod el Farag Axis’ Bridge is divided into five sub-bridges that connect a number of areas in the northern and eastern Cairo to west Cairo. The longest of these bridges is Shobra Neighborhood Bridge, followed by the Ring Road intersection bridge while Warraq Bridge, Western Nile Bridge, and the Eastern Nile Bridge follow up on the list.

The bridge has six traffic lanes in each direction and it measures 67.3 meters (222 feet) across, a feature that made it recognized in the Guinness Book of Records as the world’s widest suspension bridge.

About one million cubic meters of concrete not to mention 1,400 km (2,268 miles) of steel wire for 160 suspension cables were used in its construction and 4,000 engineers, technicians, and workers led to the realization of the project.

The bridge which crosses the Nile on the North part of Central Cairo acts as a key link to the highway stretching from the Red Sea in the East to Egypt’s northwestern Mediterranean coast. It is meant to ease congestion in the capital and also provide access to alternative routes.

The basic cost of this project reached US $9.94bn. However, if it was to be implemented now, it would cost about US $23bn given the variation in the value of the Egyptian pound. Other projects that have been launched under President Sisi include construction of a new capital in the desert east of Cairo which is currently ongoing and the expansion of Suez Canal which was completed back in 2015.