On her company’s farm in the fruit-growing Breede River Valley in the Western Cape, Adene Nieuwoudt’s usually neat dahlia plantations resemble a small jungle. The soft pastel and deep burgundy blooms have become too heavy for the thin stems, and they’ve fallen over.

“We’re not picking flowers any more,” she says, because they are not being bought. “We’re leaving them to bloom out and then we’ll pull up all the plants.”

Nieuwoudt, the owner of Adene’s Farm Flowers, made international news in March when her flowers adorned an old-age home just before SA went into a five-week hard Covid-19 lockdown.

“Everything was cancelled. We normally supply 100 weddings and events a week, and suddenly it dropped to three, and then to nothing,” she says. “We can supply only funerals now, and that’s a drop in the ocean.”

Though things are bad, Nieuwoudt says she’s lucky to have had a good season — it usually peaks from December to April — and she has enough savings to last her a few months. “But you must still go on with the farming and prepare for the next season. You need to pay for bulbs, compost, spray poisons, electricity, water and salaries,” she says.

Nieuwoudt’s small business produces only for the local market and employs 22 women — but she’s one of thousands of growers in Africa who had to destroy their flowers when governments closed borders and banned large gatherings in an effort to slow the coronavirus spread.

Demand dropped sharply and it became difficult for exporters to get their wares out.

The gradual easing of the lockdown in SA means flowers can be sold in shops again — but it’s just small amounts, and there’s still uncertainty about whether cash-strapped consumers will buy such a luxury at all.

In Kenya, Africa’s number one flower exporter, farmers are beginning to see some light at the end of the tunnel after their sales almost dried up in March. Kenya Flower Council CEO Clement Tulezi says Europe, Kenya’s largest market, is slowly waking up again, with lockdowns easing and shops reopening. “What we saw at the start of April was that the orders were beginning to come back,” he says.

Current orders are about 65% of what they would normally be at this time of year.

Dutch organisation Royal FloraHolland, which organises the international market for flowers, has announced measures to get the industry going again. It’s “already preparing for a restart to full capacity within the constraints of the 1.5m [physical distancing] rule”, it says in a statement.

Some aspects of the market were already changing prior to the outbreak of Covid-19, it says, with e-commerce, for example, “currently growing by a factor of four”.

Tulezi says: “The challenge now is how to get that product to the market.”

Almost all passenger flights have been cancelled and freighters that operated from Nairobi have shifted to better-paying routes. Those that do operate charge double or triple what they did before.

“The price on the [flower] market is still what it was before, so if you’re paying for the freight, you are not recouping your investment,” Tulezi says. “We are now dealing with the difficulty of getting in more freighters.”

Flowers are also competing for space with fruit and vegetables, Kenya’s other big export. “There is a big demand on cargo flights; therefore people elsewhere pay top dollar,” Tulezi says.

Last week Dutch cargo airline Martinair was supposed to come to Nairobi, but its plane broke down. It’s something this industry can ill afford: cut flowers need to get from the farm to their destination in 1½ days.

“The supply-chain turnover [time] is very, very short. Even then we have to ferry the flowers under a conditioned environment, so it has to move as quickly as possible to the consumer. Any delay in terms of freight means you have lost the produce,” says Tulezi.

There’s not been much cushioning from the government other than some tax reductions. Tulezi says the industry has put proposals to the government about the support they need, such as subsidising jet fuel for cargo airlines.

“The cost is high. We have to pay for both northbound and southbound flights,” he says, because the planes return empty from Europe.

There’s also the option of leveraging airlines within the East Africa region for freight services — possibilities include Kenya Airways, Ethiopian Airlines, RwandAir and Uganda Airlines. But the government hasn’t signed the necessary treaties for this to happen yet. “Those discussions are on, but we haven’t seen tangible [results],” he says.

Kenya is among the top three flower exporters in the world, with a turnover of $1.3bn and employment of about 70,000 people.

The sector is among the country’s top foreign-exchange earners after remittances and tea. In March its exports dropped to 20%. “We were right on our knees for the entire month of March,” Tulezi says.

Farmers experienced the destruction of their produce — and investments — in the Netherlands as the auctions collapsed. They continued harvests throughout March, but disposed of the flowers locally and sent 60% of the workforce home on forced leave — paid and unpaid.

The Kenyan government has offered some relief by way of exempting low-paid workers from paying taxes.

March marked the end of a four-month peak season in the country. Another peak is due in May and June, Tulezi says. “Then it’s low season until November.”

Neighbouring Ethiopia, the continent’s second-largest flower exporter, has experienced similar problems to the other markets. The Addis Fortune newspaper reports that in March the country exported less than 20% of the 160t of flowers usually shipped daily to Belgium, France, Germany and the Middle East.

Ethiopia’s flower industry is worth almost $300m a year, and is among the biggest in the country after coffee and khat, a chewable recreational stimulant. The flower sector employs 150,000 people and there are fears that 50,000 could lose their jobs for good.

Tewodros Zewdie from the Ethiopian Horticulture Producer Exporters Association told Reuters that many employees have been given annual leave for now, rather than being laid off. “We hope the situation will improve in the coming couple of months,” he says.

The country’s flower industry has asked for a working capital injection from banks, the suspension of loan repayments and a refund of VAT paid, on the assumption that it will be recouped.

“Martinair comes to Joburg three times a week at the moment, and it’s a bit of a milk run from Amsterdam, through Harare and Nairobi. If the plane is filled up from Nairobi, [the flight does not continue] to Joburg,” he says. Also, the plane tends to wait for the big loads before taking off, which means the flowers could wilt before they reach their destination.

Direct international flights to Cape Town right now are scarce, and the BidAir cargo flight to Joburg, from where there are three cargo flights a week, costs triple the normal price.

“Our challenge is that Cape flora is a heavy product,” he says. A hike in freight prices could easily take the price of one king protea from R30 to R100, which makes the flower too expensive. “It’s quite a challenge for us right now,” says Kingsley.

To return to normal, the industry needs passenger flights to resume and borders to open — but that could take a while.

There’s one upside. “Fortunately it’s our off-season at the moment,” Kingsley says. “But farmers are saying that if they come out of 2020 on a zero, it’s good” — implying that the outcome may be far worse.

Many workers will be left destitute in the wake of Africa’s wilting flower exports due to the Covid-19 pandemic. Most are women.

“[The pandemic] has brought to light long-standing problems in global supply chains,” says Evelien Vleeshouwers of the Women@Work campaign at the Dutch NGO Hivos. “Low wages, reliance on casual labour, gender inequality and a lack of social protection make people at the beginning of the supply chain suffer the most.”

Roses exported to the Netherlands, the biggest flower market in the world, are grown in Africa because of the climate and cost. “At the beginning of the flower supply chain it is often women who pick the flowers,” Vleeshouwers writes in a blog on the NGO’s website. Women are considered more delicate and therefore “better fit to handle flowers”.

At home, the women are also vulnerable, as it often falls to them to look after the sick, meaning their risk of getting infected with the coronavirus is high.

Kenya Flower Council CEO Clement Tulezi says the council’s members last month discussed protocols around keeping workers safe. Farms are audited every day for safety and hygiene, he says. “There are temperature checks on farms and we have introduced masks, so everyone wears masks on the farm and when going home.”

He says that since last week farmers have been doing training and education on Covid-19 for workers, and they plan to extend this to their communities and families.

“As we speak we have not had any cases on the farms, but we are not saying that will not happen,” says Tulezi. “If it happens, the government will come and close down the farm, as is happening to other businesses, and put everyone under quarantine. They will close for 21 days, and we can’t afford that.” 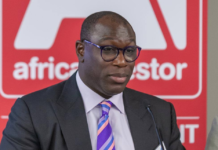