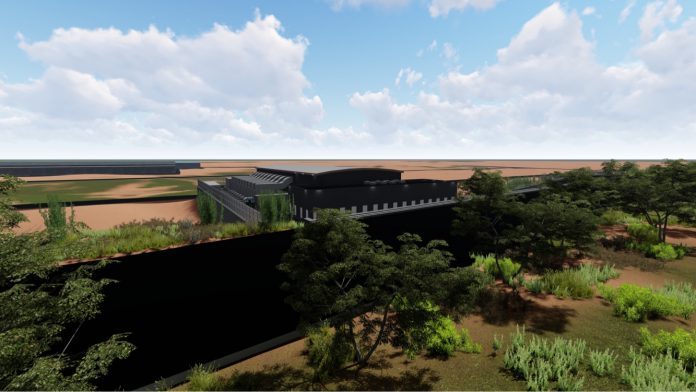 In February 2019, Ugandan cloud service provider Hamilton Cloud Services finalized an agreement to collocate their servers in Raxio Data Centre in Namanve, which will make the company Raxio’s first officially signed customer for service when Raxio opens its doors in October 2019.

“Today is an exciting day for Raxio. Not only are we proud to announce Hamilton as our first officially signed customer- but Hamilton is also a uniquely strategic kind of partner that will give other Raxio customers and opportunity to enjoy a seamlessly integrated data centre and local cloud service experience under one roof,” said James Byaruhanga, General Manager at Raxio.

Roko Construction won the contract from a total of six companies that were invited to bid for the civil works in a competitive process that started at the end of last year. The company will be responsible for all civil engineering works to be done.

Robert Mullins and Brooks Washington, both Raxio directors and James Byaruhanga, the Raxio general manager signed the contract on behalf of Raxio, while Mark Koehler and Willie Swanepoel the Roko managing director respectively signed on behalf of Roko.

“We are in the process of selecting other contractors to handle electrical and other associated works. We expect to conclude this process soon. All in all we expect to go live by November 2019,” said Mullins.

The project dubbed the located at the Namanve Industrial and Business Park was designed by UK-based Future-tech and Symbion Uganda. It will hold more than 400 data centre racks. As a result firms and institutions in the area will save their data locally, and reduce hosting costs.

The data centre facility is being developed to Tier III standards and will be the first truly carrier-neutral co-location facility of its standard. An investment of US $15m will be put through for the development over its life-cycle.

The number of internet users in East Africa stood at 92 million in January 2018, with predictions of reaching 100 million users by end of 2018, and keep growing at an average 20% annually over the next 5 years.

86.4% of IT managers working for Uganda government ministries, departments and agencies (MDAs) recently surveyed by National Information Technology Authority (NITA), said that shared services offered in data centres, such as cloud services significantly cut ICT related costs while 77.3% hailed them for the increased productivity and flexibility amongst a host of other benefits.

“Many of the data centres in the region are fairly old. Before Raxio decided to enter the market, we did not have any single tier III data centre in the region and that has been a significant constraint to achieve the kind of uptimes that a digital economy demands and that is why we’re interested in a partnership with Raxio,” said Joachim Steuerwald, the Oracle Cloud Platform sales director for East Africa.